THE GREAT SEAL OF THE UNITED STATES

On July 4, 1776, the Continental Congress passed a resolution authorizing a committee to devise a seal for the United States of America. This mission, designed to reflect the Founding Fathers' beliefs, values, and sovereignty of the new Nation, did not become a reality until June 20, 1782.

"The colors of the pales (the vertical stripes) are those used in the flag of the United States of America; White signifies purity and innocence, Red, hardiness & valour, and Blue, the color of the Chief (the broad band above the stripes) signifies vigilance, perseverance & justice."

The obverse front of the Great Seal-which is used 2,000 to 3,000 times a year-authenticates the President's signature on numerous official documents such as treaty ratifications, international agreements, appointments of Ambassadors and civil officers, and communications from the President to heads of foreign governments. The design of the obverse of the Seal, which is the U.S. coat of arms, can be shown on coins, postage stamps, passports, monuments and flags, and in many other ways. The American public sees both the obverse and less familiar reverse, which is never used as a seal, every day when exchanging the $1 dollar bill.

The Great Seal die, counter die, press, and cabinet in which they are housed, are located in the Exhibit Hall of the Department of State inside a locked glass enclosure. An officer from the Department's Presidential Appointments Staff does the actual sealing of documents after the Secretary of State has countersigned the President's signature.

The Great Seal of the United States

The American bald eagle is prominently featured supporting a shield composed of 13 red and white stripes (pales) representing the Thirteen Original States with a blue bar (chief) uniting the shield and representing Congress. The motto of the United States, E Pluribus Unum (meaning out of many, one), refers to this union. The olive branch and 13 arrows grasped by the eagle allude to peace and war, powers solely vested in the Congress, and the constellation of stars symbolizes the new Nation taking its place among the sovereign powers.

The Great Seal of the United States (inverse)

The pyramid signifies strength and duration: The eye over it and the motto, Annuit Coeptis (meaning He, [God has favored our undertakings), allude to the many interventions of Providence in favor of the American cause. The Roman numerals below are the date of the Declaration of Independence. The words under it, Novus Ordo Seclorum (meaning a new order of the ages), signify the beginning of the new American era in 1776. 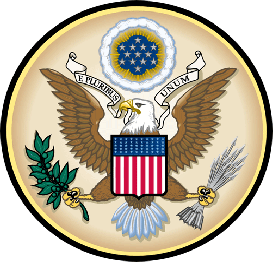 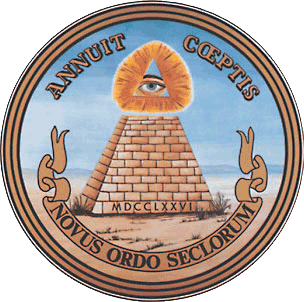 2009-17 © American First
American First is a registered trademark
United States Trademark and Patent Office Washiington, D.C.
Love your country. There's nothing else like it.
patriotic@americanfirst.net
All rights reserved